Nur-Sultan is the capital city of Kazakhstan. The city acquired its present name on March 23, 2019, following a unanimous vote in Kazakhstan’s parliament. It was named after Nursultan Nazarbayev, President of Kazakhstan from 1990 to 2019. The city lies on the banks of the Ishim River in the north-central part of Kazakhstan, within the Akmola Region, though administered as a city with special status separately from the rest of the region. A 2020 official estimate reported a population of 1,136,008 within the city limits, making it the second-largest city in the country, after Almaty, which had been the capital until 1997. The city became the capital of Kazakhstan in 1997; since then it has grown and developed economically into one of the most modern cities in Central Asia. In 2021, the government selected Nur-Sultan as one of the 10 priority destinations for tourist development.

Modern Nur-Sultan is a planned city, following the process of other planned capitals. After it became the capital of Kazakhstan, the city dramatically changed its shape. The city’s master-plan was designed by Japanese architect Kisho Kurokawa. As the seat of the government of Kazakhstan, Nur-Sultan is the site of the Parliament House, the Supreme Court, the Ak Orda Presidential Palace and numerous government departments and agencies. It is home to a range of futuristic buildings, including many skyscrapers.

The settlement of Akmoly was established on the Ishim River in 1830 as the seat of an okrug by a unit of the Siberian Cossacks headed by Fyodor Shubin. In 1832, the settlement was granted town status and named Akmolinsk. The fairly advantageous position of the town was clear as early as 1863 in an abstract from the Geographic and Statistical Dictionary of the Russian Empire. It describes how picket roads and lines connected this geographic center to Kargaly in the East, Aktau fort in the South and through Atbasar to Kokshetau in the West. In 1838, at the height of the great national and liberation movement headed by Kenesary Khan, Akmolinsk fortress was burned. After the repression of the liberation movement, the fortress was rebuilt. On 16 July 1863, Akmolinsk was officially declared an uyezd town. During the rapid development of the Russian capitalist market, the huge Saryarka areas were actively exploited by the colonial administration. To draft regulation governing the Kazakh Steppe the Government of the Russian Empire formed Steppe Commission in 1865. On 21 October 1868, Tsar Alexander II signed a draft Regulation on governing Turgay, Ural, Akmolinsk and Semipalatinsk Oblasts. In 1869, Akmolinsk external district and department were cancelled, and Akmolinsk became the center of the newly established Akmolinsk Oblast. In 1879, Major General Dubelt proposed to build a railway between Tyumen and Akmolinsk to the Ministry of Communications of Russia. In the course of the first 30 years of its existence, the population of Akmola numbered a trifle more than 2,000 people. However, over the next 30 years the city’s population increased by three times according to volosts and settlements of the Akmolinsk Oblast. In 1893, Akmolinsk was an uyezd with a 6,428 strong population, 3 churches, 5 schools and colleges and 3 factories.

During World War II, Akmolinsk served as a route for the transport of engineering tools and equipment from evacuated plants in the Ukrainian SSR, Byelorussian SSR, and Russian SFSR located in the oblasts of the Kazakh SSR. Local industries were appointed to respond to war needs, assisting the country to provide the battle and home fronts with all materials needed. In the post-war years, Akmolinsk became a beacon of economic revival in the west of the Soviet Union ruined by the war. Additionally, many Russian-Germans were resettled here after being deported under Joseph Stalin’s rule.

In 1954, Northern Kazakh SSR oblasts became a territory of the Virgin Lands Campaign led by Nikita Khrushchev, in order to turn the region into a second grain producer for the Soviet Union. In December 1960, Central Committee made a resolution to create the Tselinniy Krai, which comprised five regions of the Northern Kazakh SSR oblasts. Akmolinsk Oblast was ceased to exist as a separate administrative entity. Its districts were directly subordinated to the new krai administration, and Akmolinsk became the krai capital, as well as the administrative seat of the new Virgin Lands economic region. On 14 March 1961, Khrushchev suggested the city should have a name corresponding to its role in the Virgin Lands Campaign. On 20 March 1961, the Supreme Soviet of the Kazakh SSR renamed Akmolinsk to Tselinograd. On 24 April 1961, the region was reconstituted as Tselinograd Oblast. In the 1960s, Tselinograd was completely transformed. In 1963, work on the first three new high-rise housing districts began. In addition, the city received a number of new monumental public buildings, including the Virgin Lands Palace, a Palace of Youth, a House of Soviets, a new airport, and several sports venues. In 1971, the Tselinniy Krai was abolished and Tselinograd became the centre of the oblast.

After the dissolution of the Soviet Union and the consequent independence of Kazakhstan, the city’s original name was restored in the modified form Akmola. On 6 July 1994, the Supreme Council of Kazakhstan adopted the decree On the transfer of the capital of Kazakhstan. After the capital of Kazakhstan was moved to Akmola on 10 December 1997, the city was consequently renamed Astana in 1998. On 10 June 1998, Astana was presented as the capital internationally. On 16 July 1999, Astana was awarded the medal and title of the City of Peace by UNESCO. On 19 March 2019, president Nursultan Nazarbayev resigned, and on 23 March the city was renamed to Nur-Sultan. While it is officially called Nur-Sultan, many residents still refer to it as Astana. 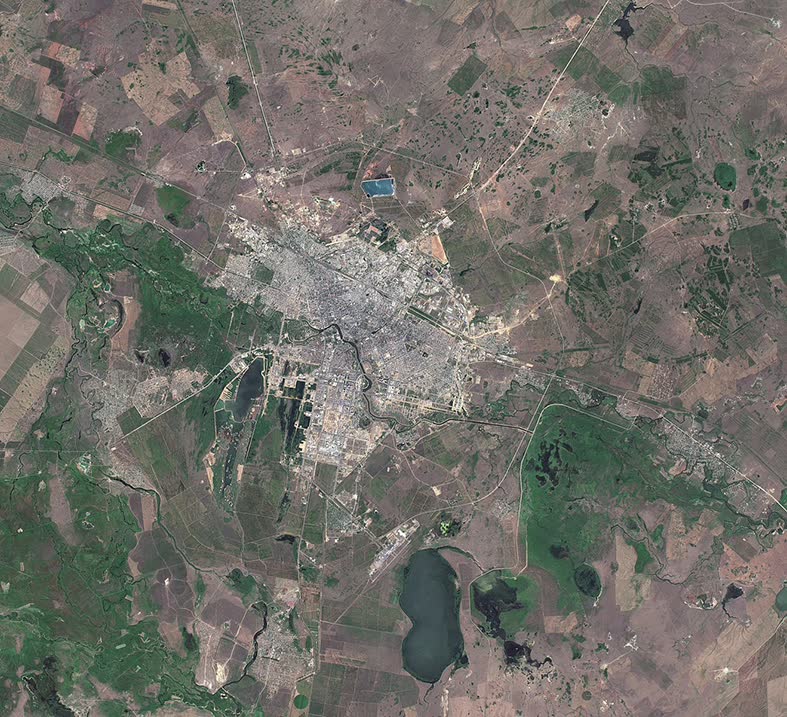 Nur-Sultan is the second-coldest national capital in the world after Ulaanbaatar, Mongolia, a position formerly held by Canada’s capital, Ottawa, until Nur-Sultan attained capital city status in 1997. Nur-Sultan has an extreme continental climate with warm summers (featuring occasional brief rain showers) and long, very cold, dry winters. Summer temperatures occasionally reach 35 °C (95 °F) while −30 to −35 °C (−22 to −31 °F) is not unusual between mid-December and early March. Typically, the city’s river is frozen over between the second week of November and the beginning of April. Nur-Sultan has a well-deserved reputation among Kazakhs for its frequent high winds, the effects of which are felt particularly strongly on the fast-developing but relatively exposed Left Bank area of the city.

Nur-Sultan (Astana) is located in central Kazakhstan on the Ishim River in a very flat, semi-arid steppe region which covers most of the country’s territory. It is at 51° 10′ north latitude and 71° 26′ east longitude. The city encompasses 722.0 square kilometres (278.8 sq mi). The elevation of Nur-Sultan (Astana) is 347 metres (1,138 ft) above sea level. Nur-Sultan is in a spacious steppe landscape, in the transitional area between the north of Kazakhstan and the extremely thinly settled national centre, because of the Ishim River. The older boroughs lie north of the river, whilst the new boroughs are located south of the Ishim.

The time offset from the UTC used by Nur-Sultan is 6 hours ahead of UTC, or UTC+6:00. This is also used by most of Kazakhstan and Almaty.