Nauryz symbolizes the renewal of nature and people and the beginning of a new life. We will tell you how our ancestors celebrated this holiday and how it is celebrated in Kazakhstan today.

March 21 is the day of the vernal equinox. It is the day when the long-awaited spring comes to drive away severe frost, when birds return from the south to their nesting places. This day has been celebrated for centuries by all Turkic peoples. Translated from Farsi, “Nowruz” means “new day”. Its spelling and pronunciation differ in various countries – Novruz, Nawroz, Norooz, Nawrouz, in Kazakhstan – Nauryz.

A new day starts in a clean house, in a clean body. This is the period when everything starts anew.

For the nomad Kazakhs, the change of the seasons was of great importance. Winter was the most difficult time of the year. In this time the Kazakhs lived in kystau (winter pastures for livestock). In the 12-cycle calendar, jutes (mass death of livestock) occurred every five to six years. If people and cattle survived winter, it was considered to be a success. Therefore, the oncoming of spring, when people moved to kokteu (spring pastures), brought a lot of happiness.

For the Kazakh people Nauryz has long been considered the beginning of change, they prepared for the holiday in advance. In honor of the holiday, people sewed colorful dresses. People gathered in the central square of the village, danced and sang. Akyns (improvising poets and singers) competed in singing and rhyming verses. 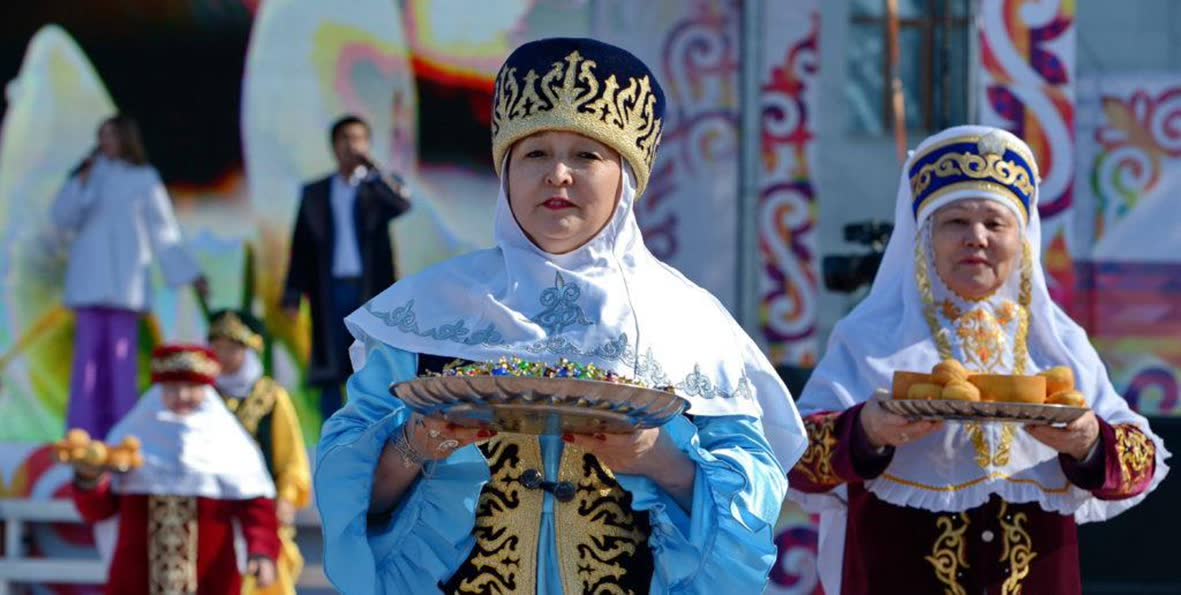 As with any big holiday, it was customary to set the rich dastarkhan (traditional space where food is eaten). Before and after the meal, prayers were read in the name of the ancestors. Nauryz-koje (also spelled as nauryz-kozhe) was served – it is a traditional dish for Nauryz made from meat broth, boiled meat, groats, and sour milk products.

In modern Kazakhstan, Nauryz is celebrated for three days – from March 21 to March 23. It is a public holiday.

The main principles and traditions of the holiday have not changed. As before, people wish each other well-being. In cities and villages they clean park areas, plant seedlings, organize large-scale festivals, performances of favorite Kazakhstani artists, national sports tournaments, culinary competitions of pilaf (Central Asian rice dish) and nauryz-koje cooking.

Each year, the capital of Kazakhstan – the city of Nur-Sultan – stands out with its cultural and entertainment program. The main events, according to tradition, are held in open areas of the city and in the territory of the EXPO exhibition.

In Western Kazakhstan, according to ancient traditions, people start to celebrate Nauryz two weeks before the official date.

In all major cities, ethno-villages with yurts (traditional dwellings, round tents covered with felt) are built, where townspeople are regaled with nauryz-koje and Baursaks (fried dough). There are also concerts, theatrical performances, shows of tightrope walkers, various sports competitions. At the same time, there is an exhibition of artisans presenting their products and an agricultural fair where they offer national dairy products such as qurt, irimshik, jent, sarymay, and suzbe.

Residents of the Turkistan Province celebrate Nauryz with a special scope. Turkistan is actually the cultural capital of the Turkic world. An Ethno-village is also usually built near the Mausoleum of Khoja Ahmed Yasawi (Turkic poet): there are yurts, altybakan (swings), dastarkhans full of national treats. Literally tons of pilaf and a thousand liters of nauryz-koje are served.

In addition, here in the south, one can see caravans of camels and horses. People show off their riches in this way, and thank the higher forces for it.

But one should not think that Nauryz is interesting to celebrate only in large cities. Celebration in the countryside is captivating too. Locals there hold primordially national competitions, which cannot be organized in the center of a big city. There you can see men lifting a live ram on their shoulders and compete in squatting with such a load. And, of course, it is fascinating to witness a real kokpar (a sport in which horse-mounted players fight for a goat carcass) or baiga. Therefore, you need to think in advance. What do you want to see: a stylized Ethno-village and a theatrical show in the city or the real life of locals in a remote settlement? In any case, neither one nor the other will leave you indifferent!