Lake Balkhash is one of the largest lakes in Asia and 15th largest in the world. It is in the east of Central Asia in southeastern Kazakhstan and sits in an endorheic (closed) basin. The basin drains seven rivers, the primary of which is the Ili, bringing most of the riparian inflow; others, such as the Karatal, bring surface and subsurface flow. The Ili is fed by precipitation, largely vernal snowmelt, from the mountains of China’s Xinjiang region.

The lake currently covers about 16,400 km2 (6,300 sq mi). However, like the Aral Sea, it is shrinking due to diversion and extraction of water from its feeders. The lake has a narrow, quite central, strait. The lake’s western part is fresh water. The lake’s eastern half is saline. The east is on average 1.7 times deeper than the west. The largest shore city is named Balkhash and has about 66,000 inhabitants. Main local economic activities include mining, ore processing and fishing.

There is concern about the lake’s shallowing due to desertification of microclimates and water extraction for multiplied industrial output. 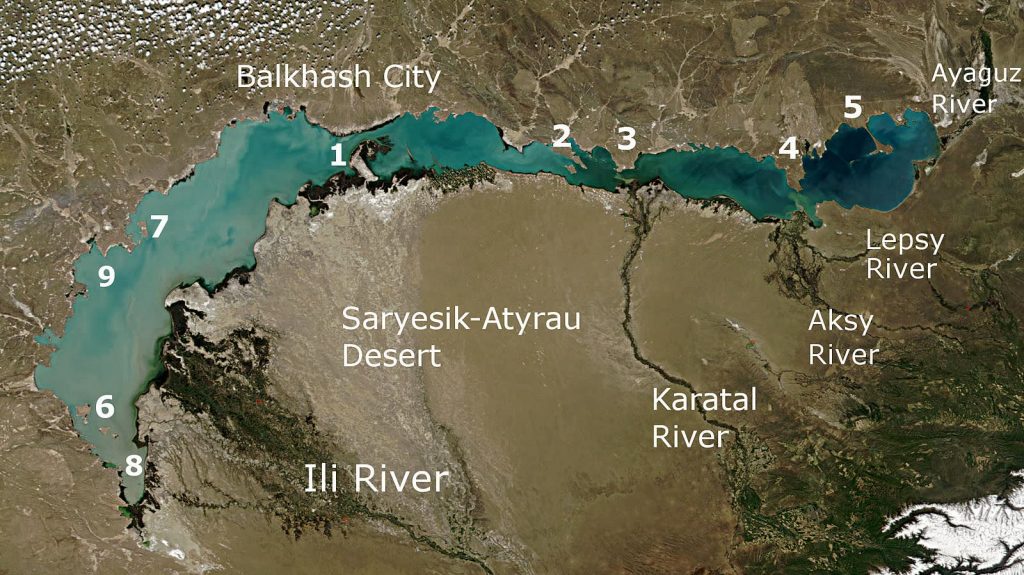 The present name of the lake originates from the word “balkas” of Tatar, Kazakh and Southern Altai languages which means tussocks in a swamp.

From as early as 103 BC up until the 8th century, the Balkhash polity surrounding the lake, whose Chinese name was Yibohai 夷播海, was known to the Chinese as 布谷/布庫/布蘇 “Bugu/Buku/Busu.” From the 8th century on, the land to the south of the lake, between it and the Tian Shan mountains, was known in Turkic as Jetisu “Seven Rivers” (Semirechye in Russian). It was a land where the nomadic Turks and Mongols of the steppe mingled cultures with the settled peoples of Central Asia.

During China’s Qing dynasty (1636–1912), the lake formed the northwesternmost boundary of the empire. In 1864, the lake and its neighboring area were ceded to the Russian Empire under the Treaty of Tarbagatai. With the dissolution of the Soviet Union in 1991, the lake became part of Kazakhstan.

The origin of the lake

Balkhash lies in the deepest part of the vast Balkhash-Alakol depression, which was formed by a sloping trough between mountains of the Alpine orogeny and the older Kazakhstan Block during the Neogene and Quaternary. Rapid erosion of the Tian Shan has meant the depression subsequently filled with sand river sediments in what is geologically a very short time span. The basin is a part of Dzungarian Alatau, which also contains lakes Sasykkol, Alakol and Aibi. These lakes are remnants of an ancient sea which once covered the entire Balkhash-Alakol depression, but was not connected with the Aral–Caspian Depression.

All the rivers of this region that carry their waters from high mountains flow into Lake Balkhash, however, none of them flows out. The major ones are: Ili, Aksu and Karatal. The lake is divided into two parts by the Saryesik peninsula (which means “Yellow Door” in the Kazakh language). These two parts are connected by the Uzynaral strait. In ancient times Balkhash was much larger and many lakes in the area were part of it (including lakes Zhalanashkol, Alakol and Sasykkol). Once it was even a sea, stretching all the way to the Dzungarian Alatau.

The lake covers about 16,400 km2 (2000), making it the largest lake wholly in Kazakhstan. Its surface is about 340 m above sea level. It has a gentle curve (sickle) shape yet with jagged shorelines. Its length is about 600 km and the width varies from 9–19 km in the eastern part to 74 km in the western part. Saryesik Peninsula, near the middle of the lake, hydrographically divides it into two very different parts. The western part, which covers 58%, but 46% of the volume. It is thus relatively shallow, quiet and is filled with freshwater. The eastern part is much deeper and saltier. These parts are connected by the Uzynaral Strait (Kazakh: Ұзынарал – “long island”) – 3.5 km wide and about 6 metres deep.

The park counts 757 sorts of plants, of which 119 should be protected, and 12 are registered in the Red Book. The forest has 65% of pines, 31% of birches, 3% of aspens and 1% of shrubs. Many species of edible mushrooms can be found.

Due to the diversity of the flora, the fauna is very abundant: 305 species of animals can be found, which represents 36% of the fauna diversity of Kazakhstan. 40% of them live at the border of their habitat, and 13 species are registered in the Red Book.

The wildlife of Burabay is much richer than that of the surrounding steppes. There species from steppes, forests and mountains mix. Some Europe-wide species are found as well as Siberian, Southern and Northern ones.

Currently, Burabay’s forests host a variety of deer including roe deer, moose, wild boar, squirrels, stoats, weasel and marten. Amongst the predators, wolves and lynx might be encountered. In the steppes and wooded areas, fox species, weasels and European and mountain hares might be met with, as well as badgers in the forests.

In the dry stony pine forests, and along the forests, the birch wooden steppes, the grey partridge and the capercaillie can be found.